The ride continues with Gunner and Emmie in the latest installment of the Next Generation Ride MC series. 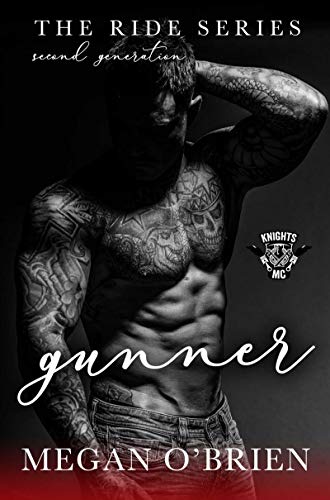 As her older brother’s best friend, Gunner Pierce has been part of Emmie Jackson’s life for just about as long as she can remember. The often arrogant, always annoying Gunner keeps his distance – except when it comes to demanding she cover up or chasing away every man who expresses the slightest interest.

When Emmie is kidnapped and confronted with a life or death situation, for the first time, Gunner seems ready to acknowledge what’s been between them for longer than either would ever admit.

If he can keep her alive.

As Gunner’s past becomes the present, what’s important in life comes into sharp focus. Now he’ll need to convince Emmie that a future with him is worth living.

The Knights MC, both original and Next Generation is one of my favorite MC series and it seems I’m always waiting for the next book. The relationship between Gunner and Emmie has been a long time coming, and it seems that they have loved each other forever – but something’s always stopped Gunner from taking that first official step. But now he’s tired of waiting and he’s going after Emmie.

Emmie is a strong and independent woman, and extremely close to the other Ride kids – especially Grace. Gunner is the typical alpha biker male, and the chemistry between the two of them is off the charts. After clearing the biggest hurdle they are on their way to their happily ever after. If it only were that easy.

Like always there’s plenty of action and drama, but it’s nicely balanced by sweet and sexy. And it’s always nice to catch up with “old” characters and see how they’re doing. The MC is like a big family and everyone is connected in a big way. We’re also introduced to a new MC club, the Royal Bloods, as Gunnar works closely with them to find his enemy. We’ll probably see more of them in Grace’s book, but I’m also kinda hoping for a new series 😉

All in all, I really enjoyed this story and really look forward to the next one!

This just made my day ❤️ #comingsoon #amreadi

Look how beautiful this is! I just love the artwor

All the feels 🥰 #newrelease #contemporaryromanc