Every mission has a price.
He never meant for her to pay it.

Aiden has never left anyone behind. Not a comrade and certainly not an innocent. But when an undercover mission goes wrong, he’s forced to abandon a woman trapped in a human trafficking ring.

Violet learned brutally that no one is promised a happy ending. She knows Aiden blames himself for his part, but she refuses to let her abduction define the rest of her life.

She won’t be a victim again. And she’s going after what she wants: Aiden.

Watching Violet transform herself into a fierce warrior is the sexiest thing Aiden has ever seen. The honorable plan would be to stay away from her–let her heal and grow without the shadow of his mistakes clouding her progress–even though every instinct tells him to claim her for his own.

But when they discover the danger they thought they’d left behind is closer than ever, they’ll have to face their deepest fears and fight side-by-side in order to survive. 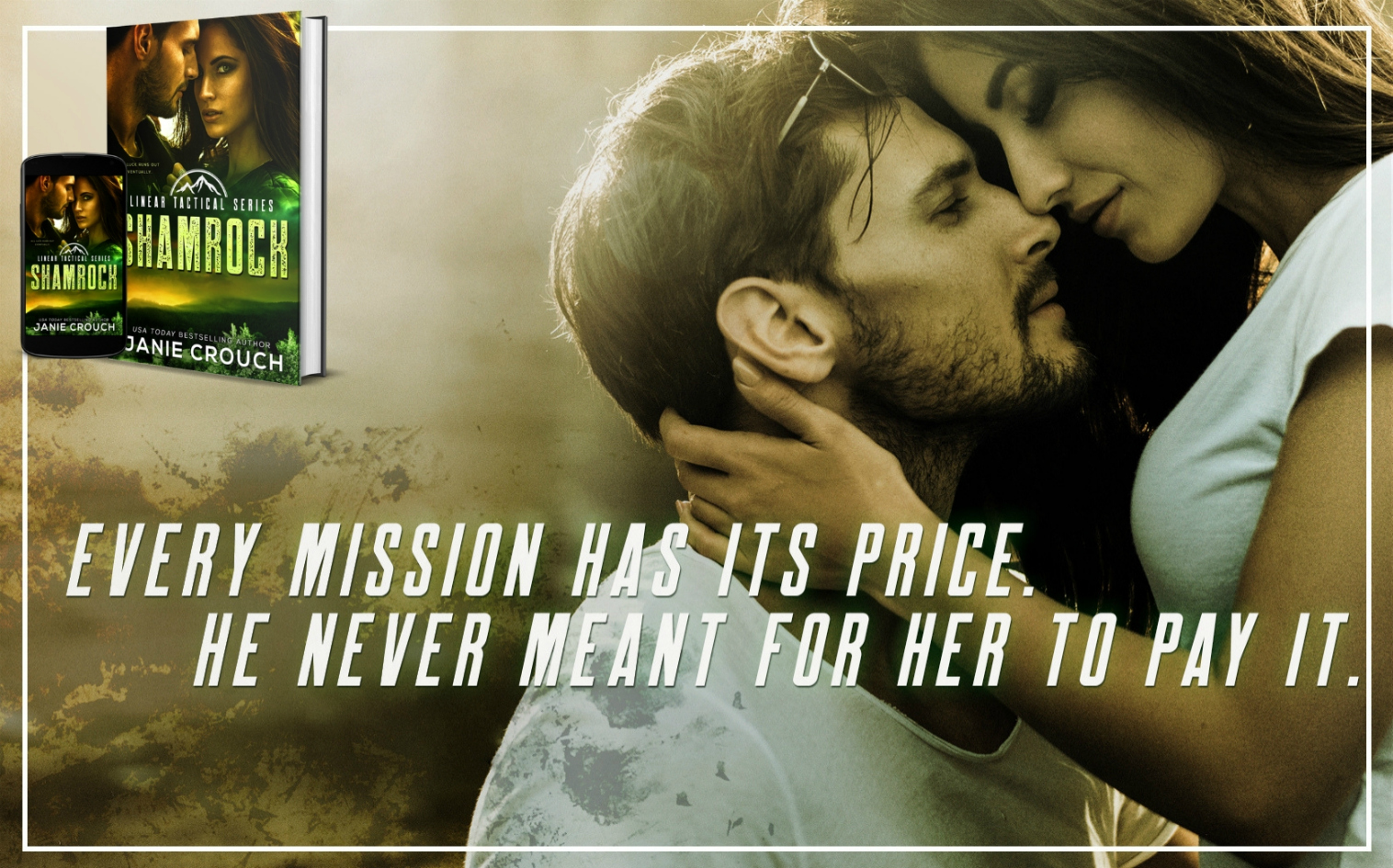 The plot in this book ties in with the two previous books in the series; Cyclone and Eagle. And I would recommend reading those two before Shamrock.

Aiden works for Linear Tactical, and is undercover when he sees Violet. He understands that she’s not there of her own free will and saves her from a situation, buying some time with her. They have an instant connection despite the situation they’re in, and Aiden decides to risk trying to get her out but fails – the first time. With the help of his team and a few others they eventually get her out, but not without some damage.

I really enjoyed this book. It was a real page turner and a perfect combination of romance and suspense. It does deal with a difficult subject – sex trafficking – and some scenes broke my heart. But it was so very well written it grabbed my attention from the very first sentence, and what an emotional, hot/sweet, action-packed and intense ride it was.

The rest of the gang from Linear Tactical, as well as Anne and Charlie, shows up throughout this story. And I really liked how Anne and Charlie reached out to Violet and showed their support and made her their friend. But what I liked the most was the building of the romantic relationship between Aiden and Violet, and the amount of healing and growing they did – both together and separate – which made their relationship and HEA so much more believable.

I feel like the series just keeps getting better with each book, and I think this is my favourite of the three. I’m really looking forward to Jordan and Gabe`s story next, “Angel”,in February. If someone deserves some happiness, it`s definitely Jordan. And I kind of like Gabe for her, despite the way he treated her in the beginning. I’m sure he’ll make it up to her 😉

“We need to get you away from this wall,” Aiden whispered.
“Why?”
“I have a rescue team outside. We just want to make sure you’re safe if things get a little more rowdy than we planned.”
Violet tried to stand but her body had taken too much damage today. Too much trauma. Her muscles just wouldn’t work. “I can’t seem to move. I’m sorry.”
He reached down and scooped her into his arms.
“Wait! I’m too heavy.”
He kissed her forehead, keeping her high against his chest as he crossed the room. “Featherweight.”
The way he moved so quickly with her, so easily, she almost believed him.
He set her gently on the ground behind him, then pressed something on his neck. “Control, Shamrock. We’re on the south wall. You’re clear to breach.”
He helped ease her down so she was sitting low on the floor. Then he crouched in front of her, pulling her head against his chest and wrapping his arms around her.
“What’s going to happen?” she whispered. “Is it going to be loud?”
“Not if everything goes the way we expect it to. But keep your head down just in case.”
His big body was surrounding her on just about every side. Anything that was going to hit her was going to have to go through him first. “What about you? Are you bulletproof or something?”
“My mom always said I had a hard enough head to stop a bullet. Plus I have a Kevlar vest. So we should be okay.”
They sat in silence for a few moments. “Maybe at some point after this we could meet each other when I actually have some clothes on. You know, just to try something different.”
His deep chuckle was enough to almost make her forget the situation. Make her forget her body had been so abused that she couldn’t even make her muscles move at her command. That this man, whose name she wasn’t sure she actually knew, had seen her naked multiple times. “That’s a deal,” he whispered. “And I’m sure Gabe has clothes for you in the van.”
The thought of having to walk, or be carried, naked even in front of the good guys sent ice through her veins. She wanted to ask Aiden to help her, but the man was already shielding her body with his own. What more did she really want?
But she couldn’t be naked again in front of a group of strangers. She couldn’t stand it. Her throat started to close, making breathing impossible.
A finger trailed up and down her cheek. “It’s going to be okay. We’re going to get you out of here. Just hang on for a few more minutes, sweetheart, all right?” 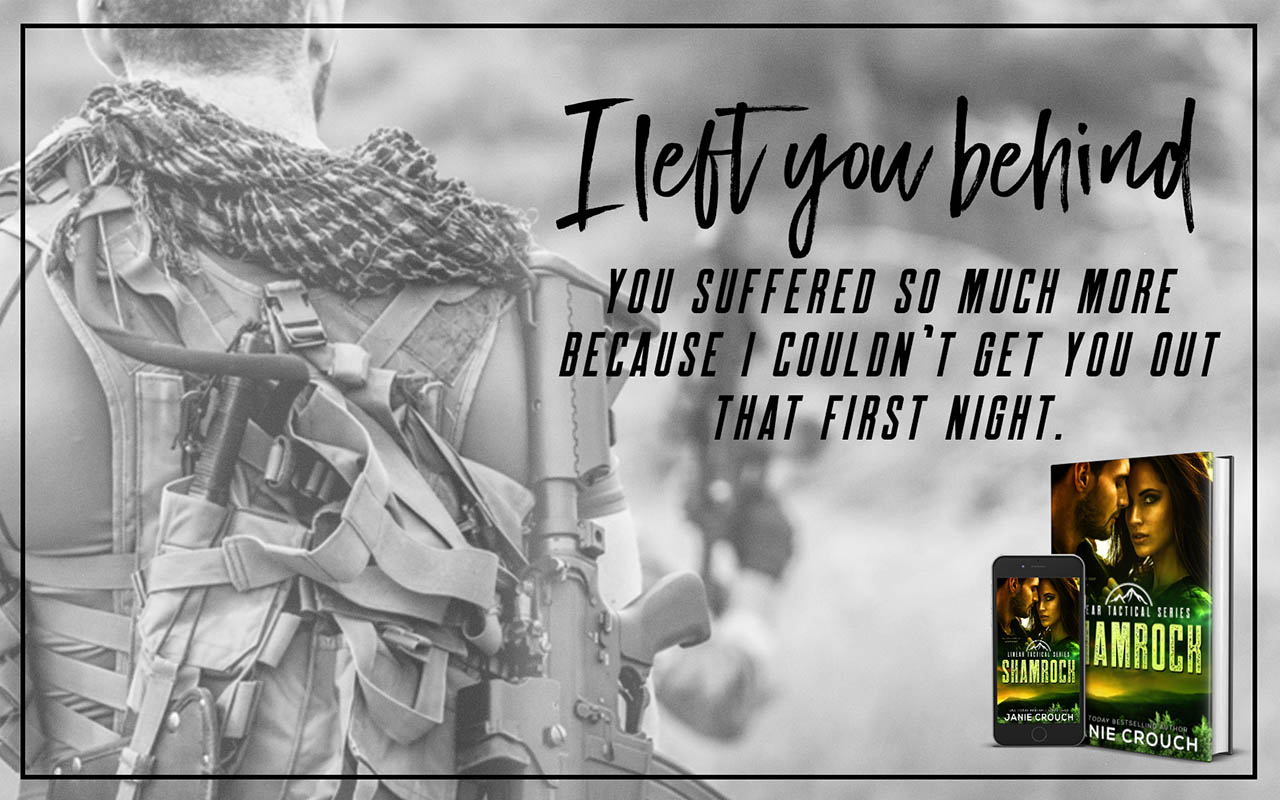 USA TODAY bestselling author Janie Crouch writes what she loves to read: passionate romantic suspense.  She is a winner and/or finalist of multiple romance literary awards including the Golden Quill Award for Best Romantic Suspense, the National Reader’s Choice Award, and the RITA© Award by the Romance Writers of America.

Janie recently relocated with her husband and their four teenagers to Germany (due to her husband’s job as support for the U.S. Military), after living in Virginia for nearly 20 years. When she’s not listening to the voices in her head—and even when she is—she enjoys engaging in all sorts of crazy adventures (200-mile relay races; Ironman Triathlons, treks to Mt. Everest Base Camp) traveling, and movies of all kinds.